Did you ride the Mudgee Classic?

We had all been watching the weather forecast in the prior week in the lead up to the Mudgee Classic to see if the wild weather forecast for the weekend would bring about any cancellation. Fortunately the weather began to look good for the Sunday and there was a growing sense of optimism. 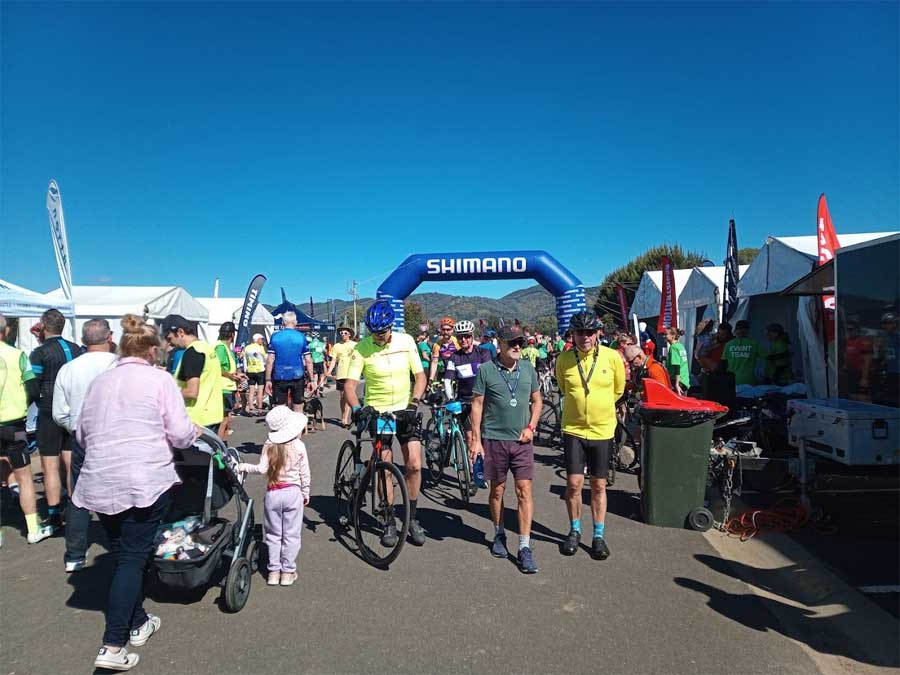 On the Saturday, the news came through that the route had been changed due to the wet roads. This last minute change was a minor blip for most riders and we were all just grateful that the ride was going ahead. So it was up early on the Sunday morning, a quick bowl of muesli and then off to the start line.

It was certainly fresh, and as we all waited in the starting gates as the MC chatted away about the day ahead – I was left wishing that I had brought a gilet and arm warmers to keep the heat in. Riders were let away in groups, and eventually we were at the front, excited for the morning ahead. “ Go,Go,Go” was the call and away the bunch rode in array of noise and colours.

It took a few minutes to clear the town and then suddenly we were on gorgeous open roads with the mist slowly dissipating in the fields next to us. After 10 minutes the sun came out and the riders began to peel off gloves and leggings and form into the famous Mudgee peletons. I picked up the pace and could sense others behind following my wheel. We were all keen to get off to a good start. Sure enough the first of the peleton groups began to form and we all kept watchful eyes on other groups that were coming from the back. For me, it was time to make a decision. Should I relax and just enjoy a gentle paced ride, or do I want to have a bit of a crack? The answer came from behind as a group came down our outside, gunning for more action. In a split second I had jumped across, and then it was a case of settling in to the rhythm of the bunch and finding my legs.

The first 30km was probably the most difficult, as fresh legs meant that many riders felt they wanted to push ahead and we all knew that this first section contained most of the elevation. I took my turn on the front and did my best not to look too out of my depth but inside I was thinking that perhaps this was going to be a long, hard day at the office. Sure enough after 10 minutes at the pointy end, I drifted back and took my place with the other hopefuls, part grinning and part grimacing. It was a brisk pace and I was glad when we crested at 30km and began a slight descent.

Time for a breather and to take a drink and grab a bar from my pocket. Sure enough, as soon as I began to eat, the pace hotted up once again and we were off up another gentle ascent. By this time I had begun to settle in and had time to look around and really take in the beautiful rolling hills of the Mudgee area. A fantastic landscape, long open undulating roads lined with fields and bushland and very little traffic. The weather was shining, blue skies as far as the eye could see. We whizzed along, a sturdy small group of riders did most of the main work at the front and I was really impressed with one of the female riders that seemed to be pushing the pace at any time there was a lull. It turned out she was a Shimano sponsored athlete, known both as an excellent road and mountain bike rider.

There were three rest stops along the way, well stocked with excellent nutrition and hydration choices, but most of the core of our group decided to press on till the end. 105km was to be our final distance and we were all carrying snacks and bottles for the full ride. Around 80km in we began our last long ascent up the gently rising road and as we crested the top, most of us were aware that we were coming towards the end. A brief spurt of speed brought us into the outskirts of Mudgee, to be greeted by the pretty tree lined roads in their autumnal colours. A few left and rights and around the final roundabout, suddenly the Finish Line was in sight. It was over – the excitement and effort of the ride had all been worth it and our group dismounted with tired legs and huge smiles. It was time for some well-earned beers and some tall tales at the bustling event village. What a great day, what a beautiful region and what a well organised event.